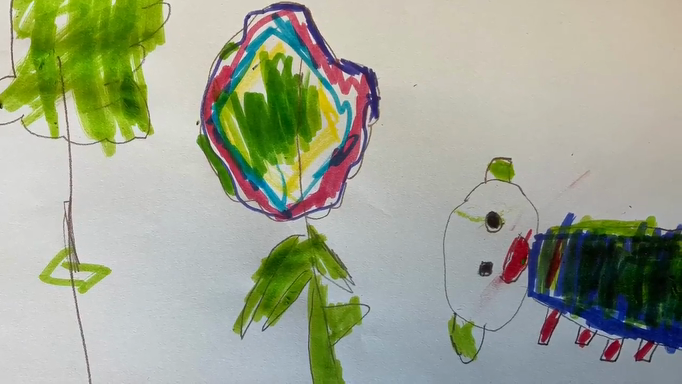 Elm class have created this beautiful prayer together to thank God for all the wonderful things He has created.

Art on the Playground

The children had a joyous time today as they searched the school grounds for the hidden Easter eggs!

The children designed crosses this week that described the happiest part of the Easter story.  We then put them altogether to create this bright and colourful display.

As part of ‘Science Week’, the children in Elm Class completed an investigation to find out whether the colour or size affects the number of seeds in a pepper.
Elm Class had lots of fun recording their song ‘Little Donkey’ for the nativity!

Today we explored the school grounds and found lots of different plant and flower varieties.
Today, the children came to school in odd socks.  This is to encourage people to express themselves and celebrate their individuality and what makes us unique.

Mrs Aldridge had a special treat for some children in Elm today!  She took them to plant some daffodils around school.  She hopes to get more planted in the following weeks!
The children had lots of fun today celebrating Children in Need by coming into school in their own clothes and pyjamas.

Elm Class have really enjoyed exploring the cottage museum at school.  In part of the cottage, we saw what the buildings would have been like during the Great Fire of London.

Today Elm Class created speeches in groups to persuade their audience why they should be friends with Leaf.

The Great Fire of London 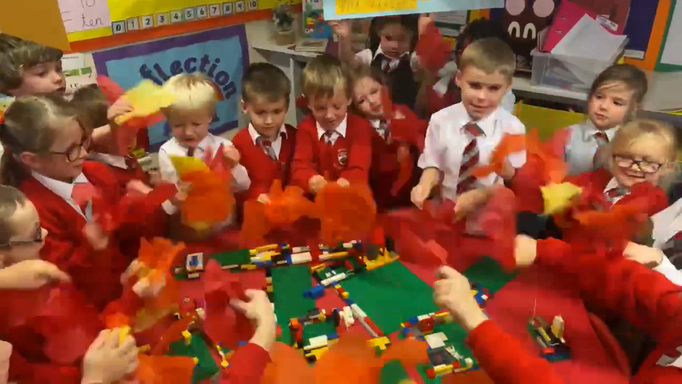 Today, the children learnt about the Great Fire of London. They recreated the city using Lego and then reenacted the fire burning throughout the city.

Elm Class had lots of fun creating their own moving story books.  The children created a puppet that they were able to move across their image.  Each story started in the Amazon and finished in France.

Elm Class have had a fantastic end to the term with their visit from Zoo 2 U!  The children got to stroke a skunk, a snake and the world’s largest species of millipede.  Mr Yates also had the pleasure of being able to carry the animals around to all of the children!

For Big Draw Day, Elm Class have created some wonderful posters to remind people to protect all the vulnerable animals in the world.

The children reenacted the moment that Zeraffa the giraffe walked through the streets of Paris.  The children were interviewed throughout to collect quotes for what they will add to their newspaper report.

Matt Maher - What a Friend

This week Elm Class have really enjoyed listened to ‘What a Friend’. We have learnt actions to the song and look forward to one day being able to sing it all together.

Letters to the Great Pascha

Today we wrote scrolls as Atir to tell the Great Pascha about the journey that he and Zeraffa the giraffe had been on.

Elm Class have designed their own vehicles that would be able to transport a giraffe from the shore of France and the way to Paris!

Today Elm Class learnt the poem ‘Witch Witch’ off by heart and performed the whole poem.

Fun in the Sun

This afternoon, Elm Class had lots of fun in the sunshine as we explored the woodland area.  We also completed a bug hunt too!